What is to be found at the foot of the far away EDF towers?

On the 16th of April, Roland Lehoucq’s class on energy politics and the move towards renewable energy, entitled “Transition Energétiques”, along with some energy amateurs who joined the excursion via Sciences Po’s newly formed Environmental Association, visited EDF’s coal-fired power plant in Le Havre’s industrial port.

In the hallway ,excited students are met with M. Lehoucq and M. Fertey to catch the bus headed to the industrial area. Fifteen minutes later, under timid sun rays, the group wanders around empty gravel streets to finally find the entrance to the plant area.

The group is welcomed by Malvina Devarieux, public relations assistant, who explains the history and functioning of the plant in a small conference room. Created in 1946, EDF played an important role in France’s reconstruction after the war and contributed to its later industrialization. Today, the company is the leading electricity producer in France. In 2014, of the energy produced, 87,8% was nuclear, 9,9% renewable, and 2,3% thermal.

Due to its relative flexibility, the thermal park is used to respond to the variations in consumption. Sometimes, important amounts of electricity have to be provided within a short period of time in order to satisfy the daily demand peak or to respond to a seasonal change. Devarieux explains, “A fall of one degree Celsius in mid-winter is equal to a rise of 7% of electricity demand”. Here, Le Havre’s coal plant has another special advantage on the French electricity market. Thanks to its portal location, it has direct it access to the coal cargo, bypassing costly and time-intensive transportation.

EDF also invests in innovation. Together with Alstom, ADEME and Dow Chemical, a Carbon Capture and Storage (CCS) experiment was conducted on the site of Le Havre and its sister plant in Cordemais. Reaching an overall efficiency of 0,05% for the moment, Devarieux points out that “there are still improvements to be made, but luckily there are also many other laboratories around the world.”

Students are standing in the coal park, built in 1983, where unit 4 of the power plant – with 600 MW of installed power capacity – is the only one functioning today. Two years ago measures have been taken to make it more efficient and durable: an important modernization of the complex was completed, taking 220 millions of investment. This large financial effort is in stark contrast with the recent decision of the government to close the plant, in order to assure France’s transition towards clean energy. The tour-guide, Sebastien Bertin, points out a key difficulty in energy policy, “the industry is not able to adapt to quick political shifts, as we are not on the same timeline that industrial projects are working on, which is 10 to 15 years.”

In a vast dark and chilly hall the group discovers the boiler. It is suspended in the air. Underneath, a yellow crab-like machine serves as a recipient of the excess coal falling down. “Back in the days, everything used to be black here, coal was laying around everywhere, and the machine was incredibly loud.”, explains Bertin. Even though on that day the plant wasn’t performing at its top capacity, the many earplug distributors indicate that the noise remains a necessary byproduct of heavy machinery.

At the upper floor, 12 meters higher, under the roof letting trough some water drops here and there, the group walks along boiler, turbine, and alternator on indicated pathways, listening to the commentaries of the guide. 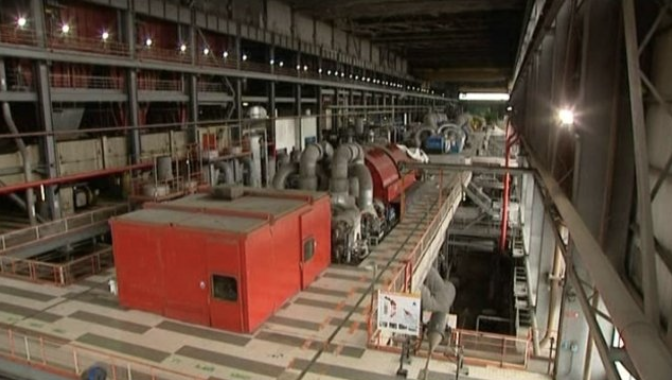 In the very back of the upper area, behind a heavy door and thick blinds, lays the command room of the plant. “This is the very heart and brains of the plant – the cockpit of the boat, and the people you see working are the captains.” whispers Bertin. The students, fascinated by the many screens, buttons, and phones, inquire after function of every one of them. Learning that the operator (“chef de projet”) is responsible for electricity production sui generis, maneuvering the burners in the boilers for optimal combustion and controlling the good functioning of the entire plant. Assisted by a team of patrols who report everything going on in the different parts of the plant, serving as his eyes and ears around the facility. “In case of emergency, it is the operator who has to stay until the plant is shut down, even at the risk of his own life. Without him the plant doesn’t work.”, Bertin says. “The biggest danger is a “puff”, an explosion in the boiler, which would affect the plant, but not endanger the surroundings. Such a case occurred once in the history of the ‘Havrais’ plant: “They stayed in the smoke, helped by the firemen with oxygen masks until the thing was shut down.”, narrates Bertin.

While walking back to the entrance, Bertin answers questions about the environmental matters connected to coal-fired electricity production. He explains the multi-step treatment process which has been added to the regular electricity production to clean the vapor of ashes and toxic particles. First, 80% of the contained azote oxides are washed out through a process called de-nitrification. Secondly, in the smog passes through a dust extractor, where electrostatic current removes 99% of the flying ashes. Finally, desulfurization, that is a “shower of water and chalk”, washes the smoke of fine particles as well as 90% of sulfur dioxide. The byproducts of this treatment process are recycled: the bigger ashes are used for road backfill, trench filling and the making sound breeze blocks. Flying ashes and particles are also utilized in the production of cement.

The visit is over, “It was cool!”, concludes Roland Lehoucq capturing the general feeling. The students also appreciated the visit. “What surprised me the most was to learn about the strong relationship that can emerge between the machine and the men that are using them day for day over years.”, declares Laureen Calcat, “Another thing that I found interesting is the strong emotional attachment the Havrais have for their coal plant. Le Havre is historically an industrial city and the factory has become an integral part of its landscape. It is also in this idea of affirming the industrial identity of Le Havre that these chimneys were embellished by illuminations that make them shine during the night, like two industrial lights watching over the city. Le Havre would not be quite what it is without the two large chimneys that rise to the sky.

Tshin-Ilya Chardayre is a Franco – Austrian second year student, and an active member of the Environmental Association.